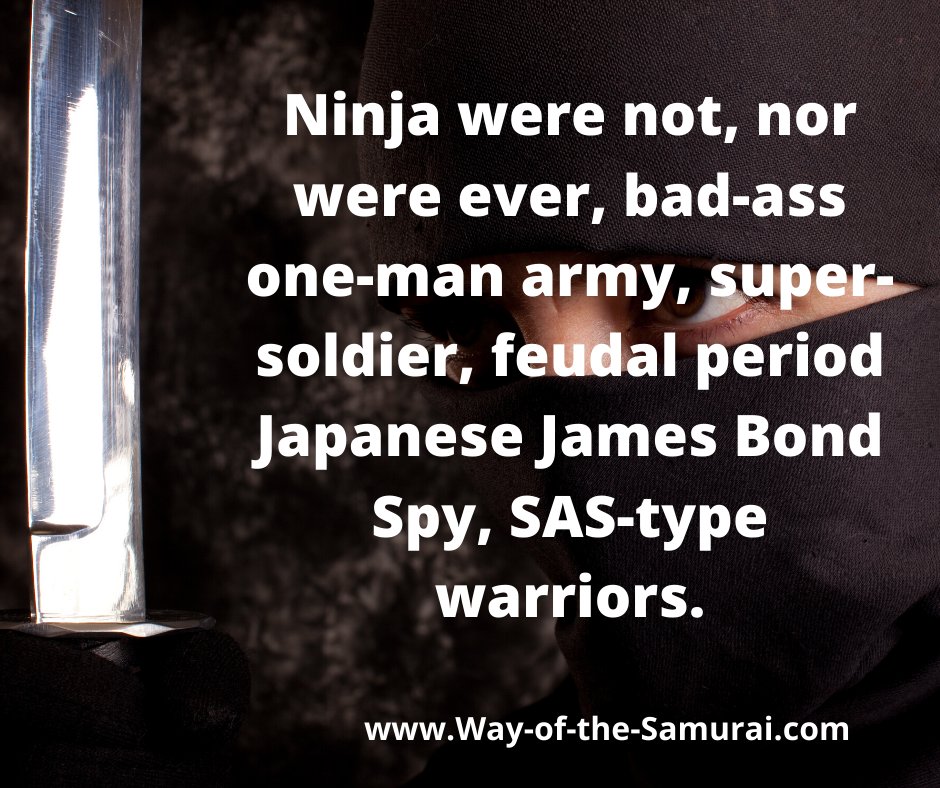 The Gunpo Jiyoshu can be seen as a starting point for the modern ninja myth. In this, Part 1 of a series exploring the primary "ninja documents", I am going to show why this document and others like it including the Shoninki, Bansenshukai and Ninpiden are essentially period fantasy documents, and largely dismissed (with good reason) by the legitimate historical and academic professionals studying feudal Japanese culture and martial arts.

Let’s get three things very clear immediately, as they are questions I am constantly asked.

With that out of the way let us talk about the Bansenshukai, Shoninki and the Ninpiden, the holy trinity of Ninja manuals. These are the three documents continually driving ninja mythology. And let me state this clearly - it is a mythology, as the popular conception of the ninja was invented in the Edo-period, and re-invented in the mid-1900’s; however, that is not the exclusive focus of this article series (though I will touch on it).

"there is NO extant documentation for ninjutsu ryuha (including the documents that Hatsumi Masaaki claims to possess) that independent experts (historians or authorities on diplomatics) have been able to authenticate as dating from prior to the late 19th century." (3)

Before we get to those documents, we must first look at their primary source of inspiration, the Gunpo Jiyoshu.

The Gunpo Jiyoshu is not remotely credible in the slightest. The first run of the text was written in or about 1618, and fully compiled about published in 1653.

We have no idea who the author was. It is credited to, or at least inspired by, the works of Minamoto Yoritomo, the first Shogun (1147–99). This is laughable in and of itself, and highlights the lack of credibility of the document. Minamoto Yoritomo was utterly and soundly defeated in the battle of Ishibashiyama in 1180. It was such a humiliating spectacle of terrible military strategy and tactics, that after he climbed out the tree he hid in (4) (total ninja tactic, am I right?)  he abdicated all future military responsibility to his brother. There is little that man could tell us about effective military strategy.

The Gunpo Jiyoshu is a banal and dull rewrite of part of Sun Tzu’s Art of War. Worse than that it lacks imagination and is a bad rewrite of classical Chinese military thought...but here is the kicker. It has nothing to do with ninja.

The 6-8th chapters of the Gunpo Jiyoshu primarily refer to “settō” (窃盗) from the Iga and Koka regions. Settō means thief. Not ninja, not a super-spy assassin hybrid. It means a person who steals stuff. These were no more “ninja” than the scumbag that breaks into your house to steal your car keys. Untrained, rough, thugs. Often the term thief or thieves is re-written as ninja or “shinobi” by those who wish to rewrite history and sell a bill of goods. But looking at the original Japanese language text, a thief is a thief, not a ninja or shinobi. A group of thieves are not ninja either. They’re a gang. Burglars. Scumbags. At the time when settō roamed, before the Gunpo Jiyoshu was actually written (it is an Edo Period text after all), bunches of thieves like this were referred to, not a ninja, but akutō (悪党), which Dr. Karl Friday accurately translates as “evil gangs” (5). Because that’s what they were, evil gangs of thieves who were a blight on society.

Let’s briefly talk about shinobi - originally that’s not a title. The word shinobi means stealth or secret. So if I was to say I was walking stealthily it might be said I was using shinobi ashi (or stealthy footwork) it does not mean walking like a ninja. For example, in the biography of Oda Nobunaga, the  “Shinchō-Kō ki”, (1579) a passage reads;

“in the middle of the night, Hashiba Chikuzen-no-Kami Hideyoshi stole into the fort of Kaizōji in Harima Province and seized it. As a result, the next day the enemy abandoned the nearby castle of Ōgō as well” (6)

The exact phrase used for “stole into” the fort is “shinobi itte (忍び入って)”. This does not mean a ninja snuck into the castle using the art of ninjutsu. It means Hideyoshi snuck in. The word refers to an action, not a type of person.

This is common in the martial arts. For example in Musō Jikiden Eishin-ryū (無双直伝英信流 or 無雙直傳英信流) we have the technique “Shinobu”. It means “stealth” or “stealthily”. It does not mean we are “ninja” or “shinobi” as titles or descriptions of the people that use that technique. We have another technique in Musō Jikiden Eishin-ryū called “Torabashiri”. It means “tiger running”. It does not mean that we are half-man, half tiger warriors, or that we run on all fours. That would be silly. Much like thinking that someone being sneaky makes them a professional sneaky super-soldier. :-)

Later, people, interested in producing propaganda material to get themselves hired, co-opted the term shinobi to make themselves more appealing in offering a professional and elite service. But spies are a long established aspect of all military and political engagement and nothing special. Sun Tzu discusses them at length, long before the advent of feudal military Japan. Pretty much every office has to deal with corporate espionage. Rumour mills and gossip. Nearly everyone one of us knows someone who loves to gossip and tattle-tale and collect info on their social acquaintance only to delight in spreading the dirt later. Charles Stiles of Mystery Diners is not kancho of a cabal of ninja warriors.

“Shinobi” or “ninja” was a job description (7), nothing more.

The rest of the Gunpo Jiyoshu is cribbed from the general military strategy of Sun Tzu, the use and need for information prior to an assault etc and large field battle equipment and tactics. Nothing about “personal protective martial arts'', no need for fighting or personal combat of any kind. Spies are not soldiers. In fact, it suggests the direct opposite. Run away to deliver your info. There are other tidbits, Samurai (actual soldiers) shouldn’t feel bad about lying if they win. There’s one hilarious entry about night attacks on pages 389-391. I say hilarious because the supposed author was so utterly destroyed by a night attack in the battle of Ishibashiyama I mentioned earlier. 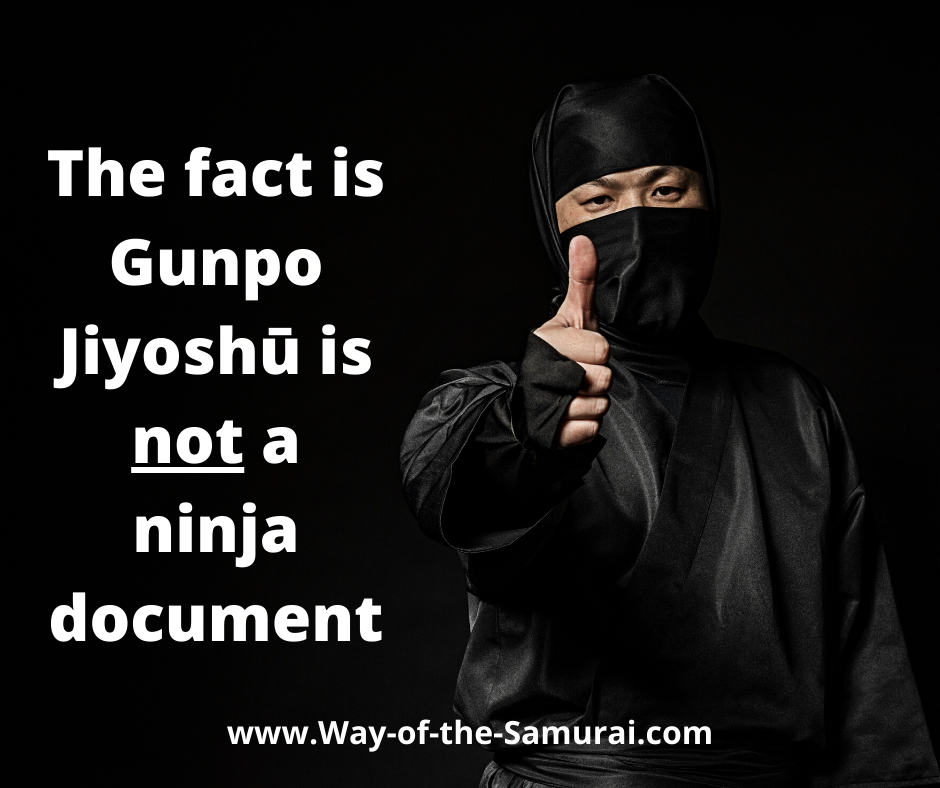 The fact is Gunpo Jiyoshu is not a ninja document. It is a bad rewrite of Sun Tzu’s Art of war intended as a marketing tool to get work. It talks briefly about thieves and spies based mostly on comments made by Sun Tzu. It discusses mass battlefield movements, not one-man army infiltration and assassination super-soldiers.

Join me for Part 2, the Shoninki, where multiple experts determine that it is not a trustworthy document, and I'll explain why; highlighting the outright lies, claims of magic immortals, and a whole lot of nonsense.

(1) You may think I am exaggerating, but this is the deluded beliefs put forward about the ninja. For example, noted fraud Antony Cummins  asserts in all seriousness that reading the Bansenshukai, a period fantasy document,"allows a single human to train diligently to become a clandestine operative with knowledge that rivals modern Special Forces". (Cummins, A. Minami, Y. Book of the Ninja, Watkins, 2013). As a former instructor to Special Forces members, military and police, with many friends who served, and those who are still on active service, I find this comment both ignorant and distasteful.  It is the macho posturing of someone who has no clue what those men and women go through and what is asked of them.