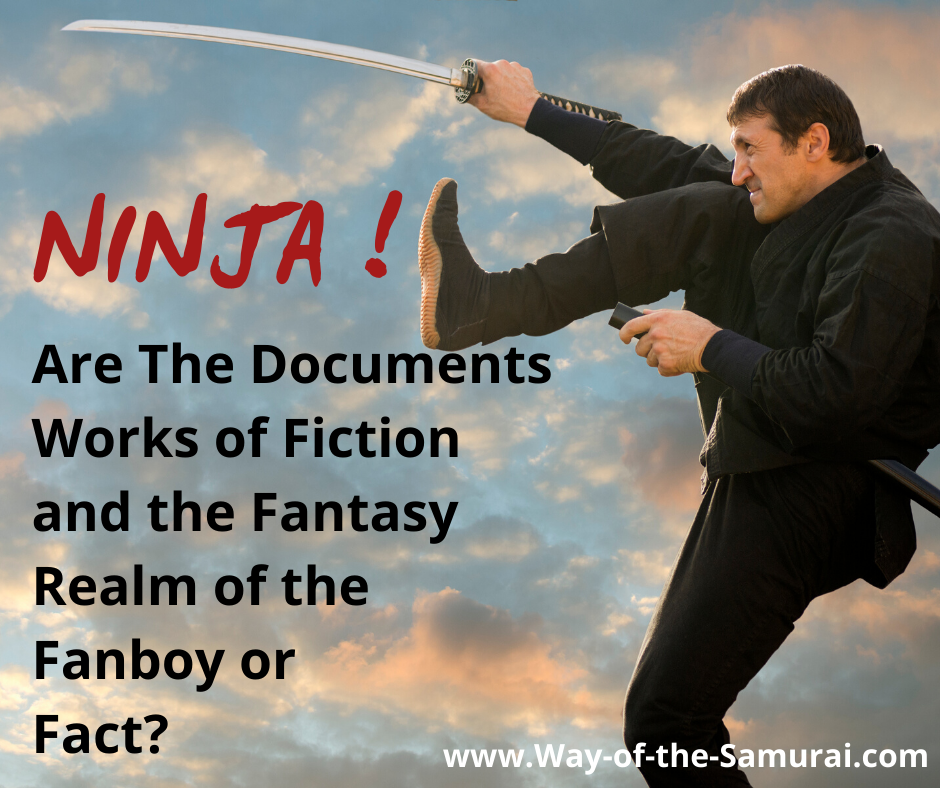 The Shoninki 正忍記 (Shōninki) is also not a credible document. I'm not disputing the document exists, nor that it was written at the time it was written (1681). The document is however, nearly entirely fantasy and propaganda. In Part 2 of this series on ninja documents we'll be looking at the Shoninki in detail, exposing the lies, misinformation, political propaganda motivations and more. If you missed the start of the series on the Gunpo Jiyoshū, you can check it out here.

"Wanatani and Yamada (1978:215) ... also consider the Shoninki, a transmission document (densho) attributed to the Kishu Ryu to be unreliable". (1)

The top professors of Japanese Budo History at Tsukuba University, the International Budo University, and Chukyo University also dismiss this document and others of its ilk.

Each of these men has written extensively on the topic, and have found no merit in these documents. Further, historical experts such as Dr. Karl Friday, Professor Emeritus, Dept. of History, University of Georgia, has concluded: 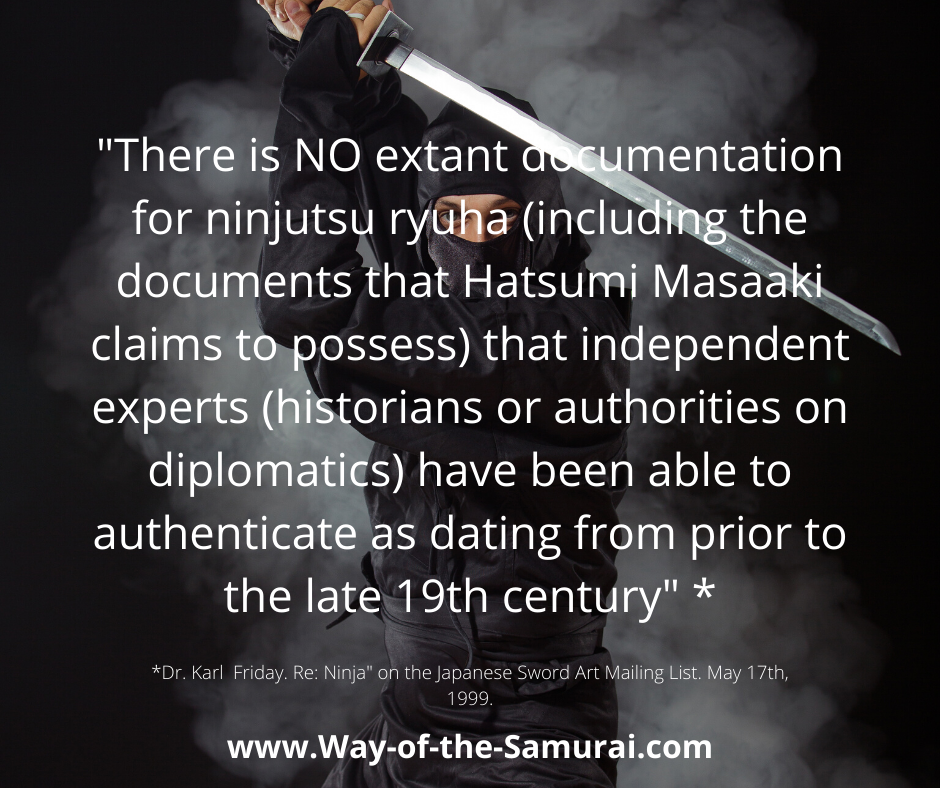 What little “authentic” information contained in the Shoninki, is directly ripped off from Sun Tzu’s Art of War in the discussion of various types of spies.

The Shoninki begins with a stringent denial that “ninjutsu” has anything to do with “thieves”. This is historically untrue. Which is why the author is at pains to suggest different. He is trying, painfully obviously, to write a propaganda piece to promote his services and of course the first thing you’d have to do is recast the fact that we’re not talking about the activities of  thugs and thieves, the exact same way as the other period fantasy documents, the Gunpo Jiyoshū and the Bansenshukai do.

What is particularly amusing is that rather than using “ninja” or “shinobi” or “shinobi no mono” the Shoninki most often uses the term “nusubito” (盗人), literally meaning “someone who enters and steals things”...in a shorter word - a thief. When the word “shinobi” is used it is used in the context of an action, eg, “this sneaky person did X”, “this person moved stealthily” etc. A good example of this is “shinobi monomi”, which literally means “concealed lookout”. It is a job type, not a class of person, social position or even specialisation. It’s what you call someone when you tell Joe, “Hey go hide in that bush and let me know if the cops show up!” and someone asks what Joe is doing - “he’s keeping sketch, or as the Japanese would say, he’s ''shinobi monomi”.

Of course the Shoninki goes to repeated lengths to make a distinction between nusubito and shinobi, despite using the terms interchangeably themselves “some experts in robbery have written down their achievements and claimed that it is a family tradition to be handed down over generations. Nowadays, these schools or ryugi of the shinobi, which are widespread in the world, are simply schools for thieves. But we are not thieves, this account is of our school”. This is part of the propaganda of the text.

In a similar vein, certain samurai clans issued codes of conduct for their warriors. Today the modern reader looks at those documents and notes how dedicated to loyalty and honour and ethical and morally upstanding those samurai were. Not for a moment reflecting why such codes of conduct were written out in the first place.

It was not to boast about what was always being done, but an attempt to enforce what was NOT being done. House rules telling samurai  not to indulge in prostitutes, drink and gambling were needed because their samurai were drinking so much, gambling so much and engaging courtesans so much that it became a problem for the house and thus, a need to curb such activities with a rule set. One need only look at the various recorded battles of Japan during the Sengoku period to see the truth of this. In nearly every major military engagement victory or defeat often lay in which groups of “loyal samurai” were bribed not to fight or to switch sides.

In the same way, the author of the Shoninki attempts to promote themselves by distancing themselves from the common understanding of “shinobi” as being synonymous with thief, thug, brigand, and such undesirable criminal epitaphs. Had that not been the understanding of the time, there would have been no need to belabour the point.  The basic underscoring suggestion is, “ok, back in the day (before the 1600’s) shinobi were just thieves and gangs and criminals...but we’re totally legit, very sophisticated leg breakers my lord”.

When we look back through history now this becomes even more evident as there was a concerted effort from about 1603 to “re-brand” the term “shinobi” and we see the advent of a distinct mythology being created. The Shoninki is a good historical example, not of ninja activity, but of this attempt at re-branding.

The Shoninki Scrap the Facts

Further examples of this purposeful wandering from the verifiable facts in the Shoninki are found early on in the attachment to the traditions of Iga and Koka...for which there is precisely zero evidence. It’s a time honoured and desperate ploy. Want to cement your brand as credible, attach yourself to a recognized name and imply endorsement - exactly as noted fraud Antony Cummins did in misrepresenting his relationship with Otake Sensei of the Katori Shinto Ryu in order to try and gain the sheen of legitimacy for his illegitimate enterprise. In this sense, I can certainly say Cummins has applied the teaching of the Shoninki well.

“Shingen Takeda of Kai also used people, called suppa, who were nusubito of this province. This knowledge finally reached Koga in Iga” (8)

And such inconsistencies abound in such a short document. Despite claiming connection to Kusunoki ryū and Kishū ryū (the Shoninki is claimed as the densho - transmission document, of Kishu ryū after all), there is only a glancing reference to Kusunoki Masashige (楠木 正成). This brief mention occurs in the opening introduction, which is shocking considering the wealth of historical information about the man and his fame in connection with  Emperor Go-Daigo and the battles of the Genkō War. It appears the author, “Fuji Masatake” (allegedly) seemingly knew little about him.

And perhaps this brevity is for the best, for even in that one short line - there is a huge amount of historical inaccuracy.

Except...he didn’t. Kusunoki’s military tactics had nothing, literally zero, to do with espionage.

“Kusunoki’s tactics appear to have been more in line with those of the rowdy warrior bands (akutō) and the non-conventional methods of the “warriors who hid in the fields (nobushi) of central and western Japan. Those battlefield tactics, which had developed subsequent to the Mongol invasions of 1274 and 1281, were already commonly used by warriors of all classes in western and central Japan during Kusunoki’s lifetime” (9)

This attempt in the Shoninki to connect to the legendary warrior and claim he used shinobi, is fanciful revisionist fiction, designed to flatter a prospective employer.

Dodgy Dates and a Mystical Merlin

There are many more discrepancies, inaccuracies and inconsistencies in the Shoninki. For example, the lack of knowledge on the traditional skills of “dakkonin” (a key teaching of Kishu ryū), the complete absence of military strategy in the document, which is very surprising considering the well known and established reputation of Kusunoki Masahige. Despite this the Shoninki clearly tries to connect itself to older lines, and older times...about 2 centuries before Japan was engaged in a military capacity that would have even required rudimentary intelligence gathering.

For any student of Japanese history the notion of a vast intelligence gathering network being required is patently absurd. The reason for these inconsistencies in the Shoninki is evident, the author has no knowledge of these matters. Instead, focusing on modern security strategy.

This leads to the short, banal, and obvious discussion of various costumes used to travel easily and without notice. This would not have been applicable or indeed relevant to pre-Edo spies, but is a fairly obvious statement listing the ways to get around modern Tokugawa Shogunate security. It’s inclusion here is not about ninjutsu, it’s a job application. “Hey, look I found these various obvious flaws in your security system, hire me!”

The dates referenced in the text frequently do not exist. It cites people that did not exist, such as the chapter on the teachings of Kiichi Hōgan, a legendary mythological magician of the 1100’s, and the discussion of the same bears no resemblance or connection to the bodies of work he is associated with. The Shoninki here is little more than fan-fiction about a Merlin-type character.

The tools and stories of the Shoninki are of the same sort as the gadgets of Bond movies. Much like Bond’s underwater breathing device in Thunderball. Every military unit in the world (and every wannabee secret agent) wanted one of those breathers. The British Royal Corps of Engineers even asked Thunderball art director Peter Lamont how long the device could be used underwater. He said "as long as you can hold your breath”. Shoninki gadgets, like Bond's, sound cool, but weren’t widely used, if real at all. Like most of the ideas in the Shoninki they are vague, often contradicting known and established facts. 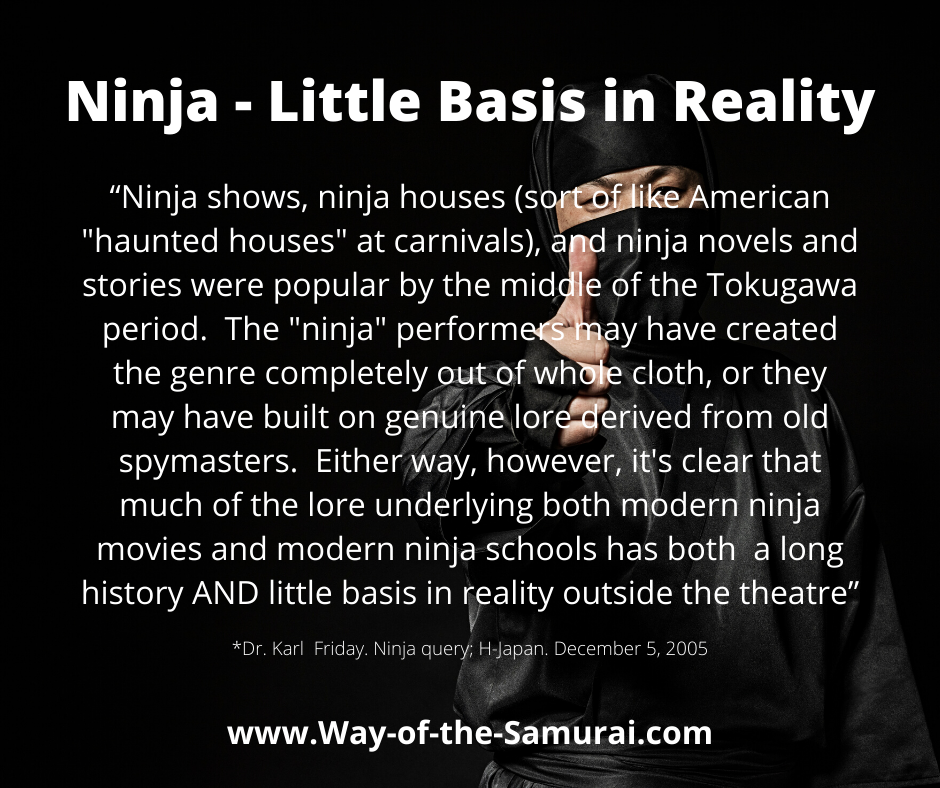 The Shoninki is feudal Japanese James Bond fan-fiction. It is not a document filled with historical accuracy, but fantasy. Not how to document, but a sales pitch, a sensationalist ad to try and get a job, filled with fantasy and nonsense.

In Part 3, I explore the Bansenshukai, often referred to as the "ninja-bible" and breakdown step by step why this often cited document is not historically credible in the least...

You've been reading about the Shoninki. Check out Part 3, the Bansenshukai here.

Click here to go back to Part 1 - the Gunpo Jiyoshu