As Legitimate as a Kill Bill Hattori Hanzo Blade

The Ninpiden is basically period fan-fiction appearing in the 1700's well after the end of the "ninja", and Hattori Hanzo being the author is about as realistic as his descendant making a sword for Uma Thurman. Welcome to the final part in this 4 part article series on Ninja Documents. In case you missed them:

Now, we continue with the Ninpiden.

Much like the Bansenshukai, the Shoninki and the Gunpo Jiyoshu, the authorship of the document is questionable. There are no original copies of the document left. All we have are copies and those copies are fraught with issues. Those issues much like the Bansenshukai involve mistranscription. One copy states use the right hand, the other copies states use the left hand. Some copies are missing whole sections, other copies have completely new sections added in.

Further the dating of the document is disputed. With dates ranging from 1560 to 1655 to 1733. And multiple authors (all co-incidentally famous names) being listed as the author, including Hattori Hanzo, Hattori Sukenoshin and Kato Sakuzaemon. The general academic consensus is that the document is a complete work of fiction created in 1733 and deliberately falsely dated and falsely attributed in order to provide provenance and increase it’s value.

It is another fictional document written by someone with no actual first hand knowledge of the subject matter. This is evident in the vast number of instances of out right nonsense in the text (it famously confuses hand positions, get’s measurements utterly wrong etc).

It opens with the same tired fake history as presented in the Bansenshukai (though it gets the names and dates wrong several times in a short matter of sentences) and then lists a number of alleged ninja items. Yet immediately the evidence of a lack of knowledge and imagination can be seen as it resorts nearly immediately to - ‘I can’t actually document this stuff, it’s a secret, just know that I know and you should hire me to find out what I know, please give me a job’.

Then it gets to the “good stuff”...the “ninja” weapons. Which it proceeds to write utter nonsense about. For example:

Finally after lot’s of fanciful, impractical imaginings the "author" of the Ninpiden closes with the revelation that all of these teachings come from an immortal Chinese mystic sorcerer called Xu Fu.

If you believe the stories of the Ninpiden I highly recommend your next study should be of the texts of K'un-Lun and the skills needed to defeat Shou-Lao the Undying. 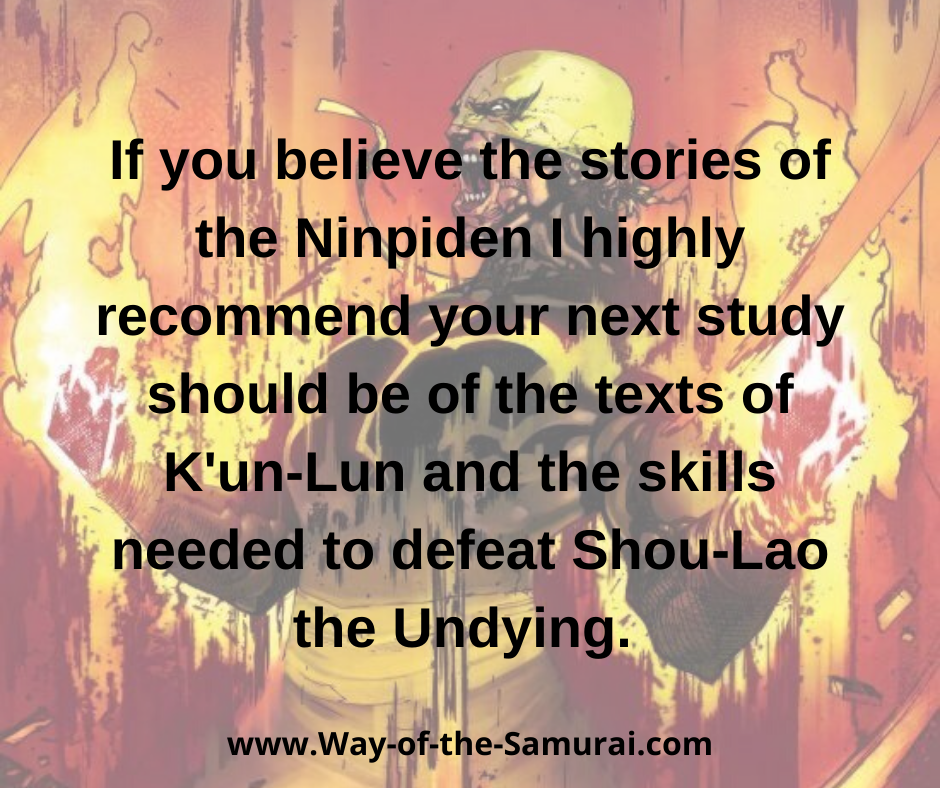 Thank you for joining me over the course of these four articles covering the major ninjutsu works. I am sure you can appreciate now the full extent of the folly in lending these documents any validity or credibility.

While they may be of value as examples of failed propaganda campaigns in their own time, they have succeeded in capturing the imagination of many. Being so bland and vague that each reader can important their own fantastical ideas, their own vision of a fantastic warrior, a super spy, clad in black and unbeatable in combat.

But the facts are, these are not historically accurate or credible documents. Instead they are evidence of a concerted effort to create a new mythology. One that produced fantastic works of fiction. Used by feudal playwrights to modern day movie producers, from sincere martial artists to dubious martial arts con men. In the goal of spreading misinformation, one of the chief roles of the legendary ninja, they have certainly succeeded.

A Single PDF, compiling all 4 articles is available for immediate download on the Subscriber Downloads page.

You've been reading about the Ninpiden. Check out Part 1 of this series, the Gunpo Jiyoshu, here.