An FAQ for the HEMA practitioner in 5 Parts. 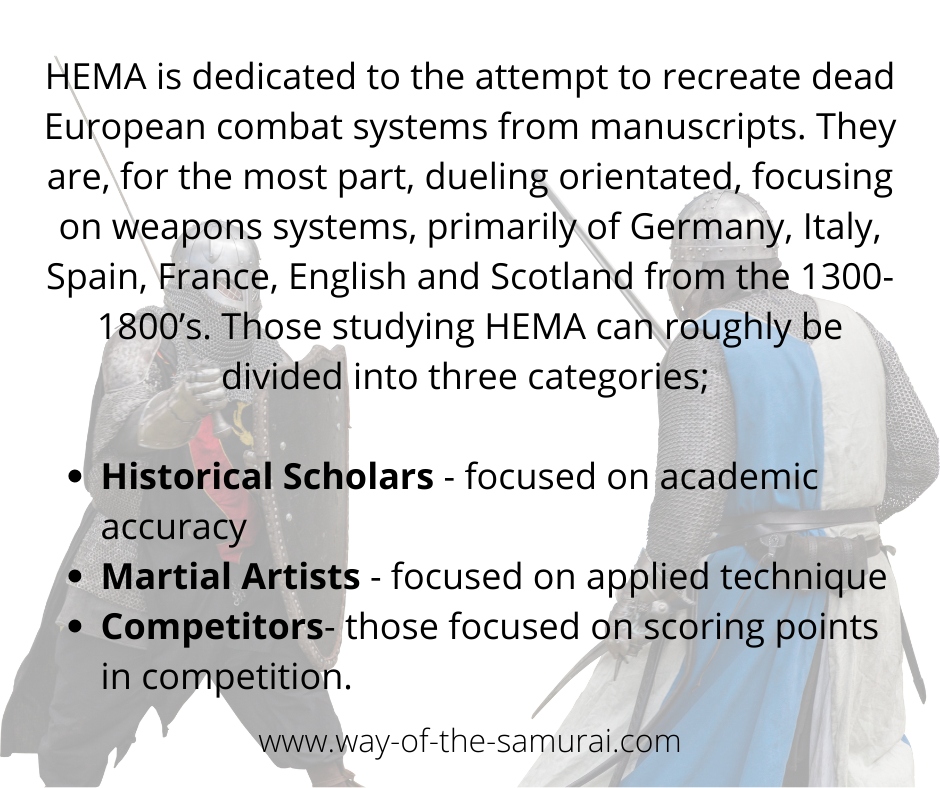 HEMA and Koryu questions are becoming increasingly asked in forums, social media groups and even in traditional dojo. HEMA enthusiasts increasingly contact Japanese Martial Arts practitioners, particularly those involved in traditional Japanese sword and polearm arts. HEMA enthusiasts often do so looking to bolster their understanding and application of their own arts.

In Part 1 of this 5 Part Series I will outline the fundamental differences and similarities between HEMA and Koryu. From there, I shall focus each part on a different topic:

Each part is meant to be read sequentially and they build upon each other, so I strongly suggest reading in order. However, if you wish to jump to a particular topic, feel free to use the links above.

Nearly without exception, the HEMA enthusiasts are respectful and sincere in asking about Japanese weapons arts, often having read a little about Koryū bujutsu (the feudal martial arts used by samurai, predating modern styles [gendai] such as aikido and karate). Sometimes they have learned about certain Koryū style names such as Katori Shinto Ryū (because it has all the weapons they are interested in). Sometimes they have learned specific techniques or weapon names like kenjutsu, naginatajutsu, yarijutsu, etc.

Due to the circumstances of HEMA, primarily the exploration and recreation of techniques through the study of historical European manuals, they often seek out students of Koryū who follow living traditions, hoping in some cases to experience a more structured curriculum, one that is not recreated but has been in continuous transmission, or sometimes to compare our documents with theirs...I mean there are only so many ways to use a sword or spear due to the inherent nature of the weapon and the limitations of the human body.

Over the years with the increasing popularity of HEMA, thanks in part to computer games and shows like The Witcher and Game of Thrones, the number of questions I receive from HEMA practitioners on the subject of HEMA and Koryu has risen from 1-2 a month to 1-2 a day.

Often these questions revolve around the same key topics...given this, rather than continue to answer individually, I've compiled and fleshed out my most common answers to give you, the HEMA student a quick start guide and hopefully give you the answers to questions you've been thinking about, and perhaps show you why, disappointingly, you probably won't get the answers you want from Koryū.

The questions asked generally fall into these topics:

Ultimately, a great deal of these questions comes from a misunderstanding of what Koryū bujutsu is and the purpose of Japanese Sword Arts.

Hopefully, in responding to the four topics above we will cover the most common issues relating to HEMA and Koryu based inquiries into Koryū Bujutsu and primarily, Japanese Sword Arts (JSA) and clear up those inherent misunderstandings that lead to such inquiries.

Before I get into that though, I want to preface these answers with the following statement.

I am not attacking HEMA. I am not saying that Koryū bujutsu is better or worse than HEMA. This competition between the two often comes about due to these same misconceptions. HEMA and Koryu do not share a similar methodology, purpose or often, even the same goals. There is a fundamental, intractable difference in philosophy. While oil and water are both liquids, they don’t mix and they don’t have many of the same properties. Same here.

We’ll explore these misconceptions in more detail, but to briefly summarise the two positions; 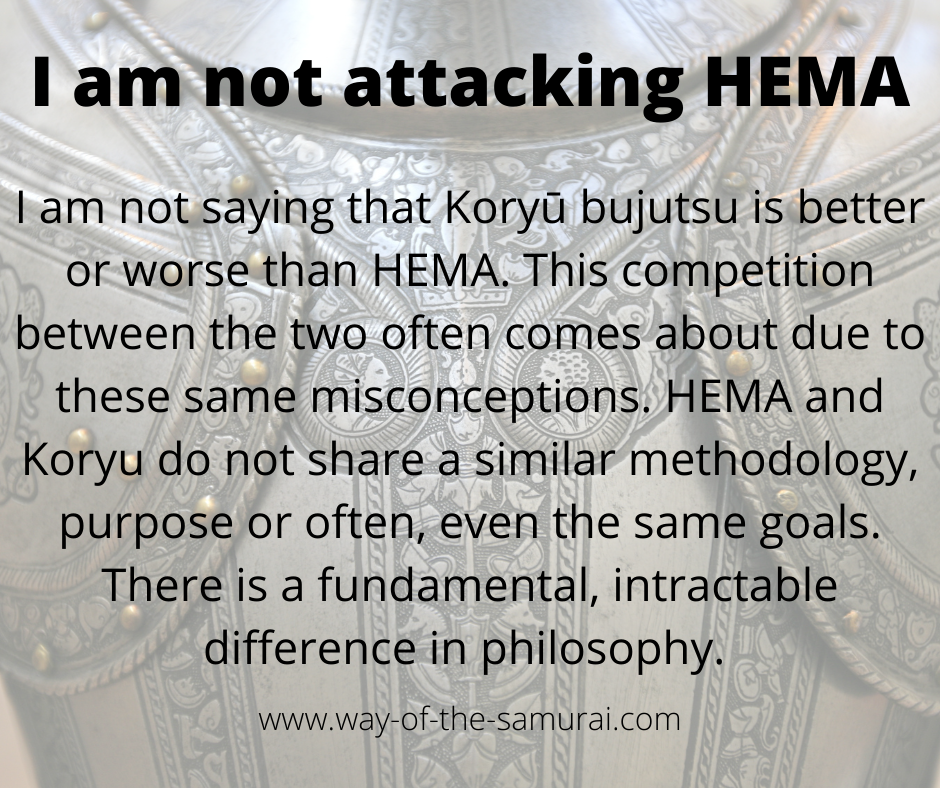 HEMA is dedicated to the attempt to recreate dead European combat systems from manuscripts. They are, for the most part, dueling orientated, focusing on weapons systems, primarily of Germany, Italy, Spain, France, English and Scotland from the 1300-1800’s. Those studying HEMA can roughly be divided into three categories;

While this article is not a criticism of HEMA (I have studied HEMA with a particular focus on the sword and buckler for 3 years)  - it will be important to note some of the differences here between these three primary groups as it will directly impact their perception and interest in Koryū bujutsu and the kinds of questions they ask. Of course, people can have varying levels of interest in all three aspects simultaneously.

The Historical Scholar will generally insist on HEMA adhering strictly to the evidence, documentary or otherwise. For example, the Scholar won’t wear modern training gear while doing HEMA, as that is not representative of the footwear worn in the period. This massively affects body movement. For instance, those wearing modern trainers, with absorbent heels will primarily heel strike on stepping. This would not be a likely occurrence in the middle ages in certain schools of fencing for example as they would have worn thin leather, unsoled shoes or stockings with what amounts to slippers for the most part. [1] Heel striking would have produced significant pain, increased the risk of injury and the removal of such protection fundamentally changes footwork.

The Martial Artist often is focused on the physical application of the technique. Studying the text and images and formulating what they, at best, acknowledge is an interpretation of how they think it ‘may’ work. The Martial Artists then test these assumptions, see what works and what does not and attempt to refine their understanding through physical application. They won’t wear the leather slippers, as they’ll fall apart with rigorous training, but they will try the next best modern equivalent, flat unheeled sports shoes, kung-fu shoes etc.

The competitor, by contrast, cares less about the history, favoring modern footwear, protective gear, etc and less about the historical accuracy of the martial techniques, and is more focused on what will work in competition, according to the criteria of the rules - as such it less a representation of genuine swordsmanship of a historical period, less a martial study and more sword-fighting to a particular rule-set. They go with what works. They’ll cut with the rear foot off the ground to extend their reach despite the recommendations of Liechtenauer and Fiore that your feet should be on the ground and you should be in a stable position when cutting. One could argue (and they do even in Japanese and Chinese martial arts), this then is a “combat sport”, not a martial art.

Each of these three archetypes of HEMA practitioner approaches Koryū bujutsu a little differently. The Historical Scholar approaches from the perspective of academic comparison. Not dissimilar to the early attempts to link Bushido to the European knight’s code of chivalry. Like HEMA and Koryū, there is in fact, not much to link the two at all, and trying to apologize or synthesize an understanding does a disservice to both.

The Martial Artist looks to see if the structure and fundamental approach of Koryū bujutsu can be used to create a framework and context for their recreated traditions.

The Competitor wants to see if the techniques of Koryū can be applied to give them an edge in competition, a secret move if you will.

2. HEMA and Koryu: What is Koryū Bujutsu? 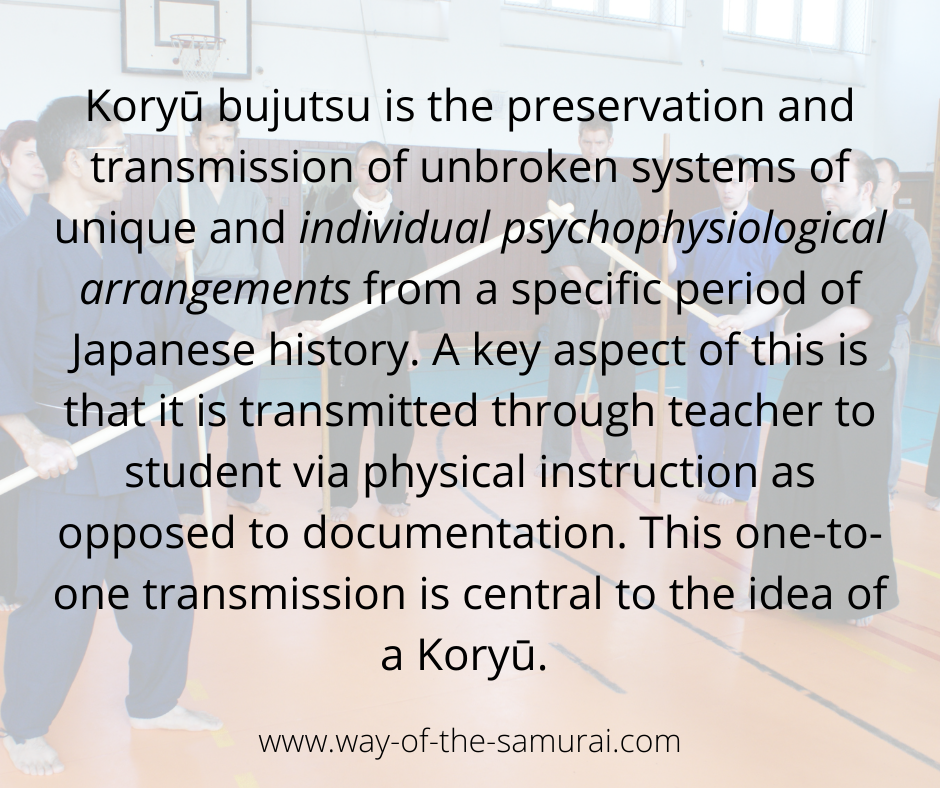 By contrast, Koryū bujutsu is the preservation and transmission of unbroken systems of unique and individual psychophysiological arrangements from a specific period of Japanese history. A key aspect of this is that it is transmitted through teacher to student via physical instruction as opposed to documentation. This one-to-one transmission is central to the idea of a Koryū.

Within the study of Koryū bujutsu there is less variation as to those studying it. The serious student of  Koryū bujutsu rarely has personal ambitions beyond what is required for the ryū. They are not there to win fights or to recreate what their opinion of history may be. They are there to preserve what their teacher showed them and told them, as their teacher did and so forth and transmit that information faithfully to the next generation. The focus is entirely different to that of HEMA.

Koryū is not about rebuilding, testing what works and what doesn’t, as we’ll discuss later. In fact, most  Koryū practitioners would hold that recreation is impossible. (We’ll look at this later too). They wear clothes and attire that are accurate as being worn in the period. They use, if at all possible, the actual weapons of that period, or modern reproductions, made in the traditional manner to those traditional specifications.

They sit in postures and move themselves physically in a manner that our bodies today are not habituated for. In fact, some schools postures are now considered a form of punishment in modern Japanese schools. They practice archaic body movements completely divorced from our modern understanding, both physically and culturally.

They are historical caretakers, doscants of a collection of artifacts. Ones that live and breathe. The physical techniques are often incidental to the lessons of the ryū, the collection of philosophy, religion, mindset, and strategy of a unique and individual school.

Each school possesses its own inherent specific neurological and psychological understanding that is taught through physical organisation. This is a very important point to understand. You cannot mix and match different Koryū schools and preserve them. You can of course, study more than one, but this is difficult as you must keep the physical, emotional, psychological and philosophical entities separate within yourself.

With this understanding in mind, let’s look at the four topics raised.

In Part 2 of this Series I will explore the differences in Literature, Part 3 will focus on the techniques, Part 4 will discuss Sparring in detail and finally, Part 5 will cover the question of Compatibility and my conclusions.

You've been reading about the HEMA and Koryu. Check out Part 2, Koryu Literature - here.