Part 5 of a 5-Part HEMA and Koryu FAQ Series

In Part 1 I explained the fundamental differences between koryu and HEMA. Chiefly HEMA is trying to recreate, while Koryu is trying to preserve. Different goals, outcomes and methodologies.

In Part 2 - I delved into the vast differences between HEMA literature and manuals, vs the densho of koryu. It's nearly like the difference between a how to drive a car manual and a scroll of poetry about what it feels like to enjoy a perfect car ride. Sure, they are both talking about driving a car...but that's not the same type of info.

In Part 3 - I pulled back the insider curtain and shared a detailed breakdown of the techniques of Koryu, and why they aren't actually always what they appear to be.

In Part 4 - I showed you the truth about sparring and gave you my insights as to why perhaps Koryu arts focused on kata over sparring as a method of combat training.

Now, in Part 5 I am going to try to answer that question - Can Koryu Help HEMA? Are they compatible?

This might surprise you but Koryū is not actually about winning fights. Or specifically, YOU, winning a fight. The great western pioneer of Koryū bujutsu, Donn Draeger once noted that budo such as karate and judo were methods of “individual self-protection” civilian arts of self-defence. By contrast Draeger said that bujutsu were methods of “group self-protection”, military arts designed for unit protection and warfare.

“in the  Koryū there are no "champions." The karate school may feature one or two stars who shine at the competitions (and who often use others in their school as little more than sparring partners). But the  Koryū is, on the proving grounds of the battlefield, only as strong as the weakest link in its membership. There is a sense of responsibility among members, then, for everyone's development.

In this sense, the Koryū are not nearly so egocentric as are the modern budo. If today's budo dojo really wanted to do things "the samurai way" as they often imagine or advertise, they could begin in this fashion: at the next tournament, every competitor representing the school should give up his trophies unless the majority of his dojo-mates have won their matches as well. After all, on the battlefield, where the real samurai way was in effect, individual accomplishment is relatively meaningless unless the whole group succeeds”. 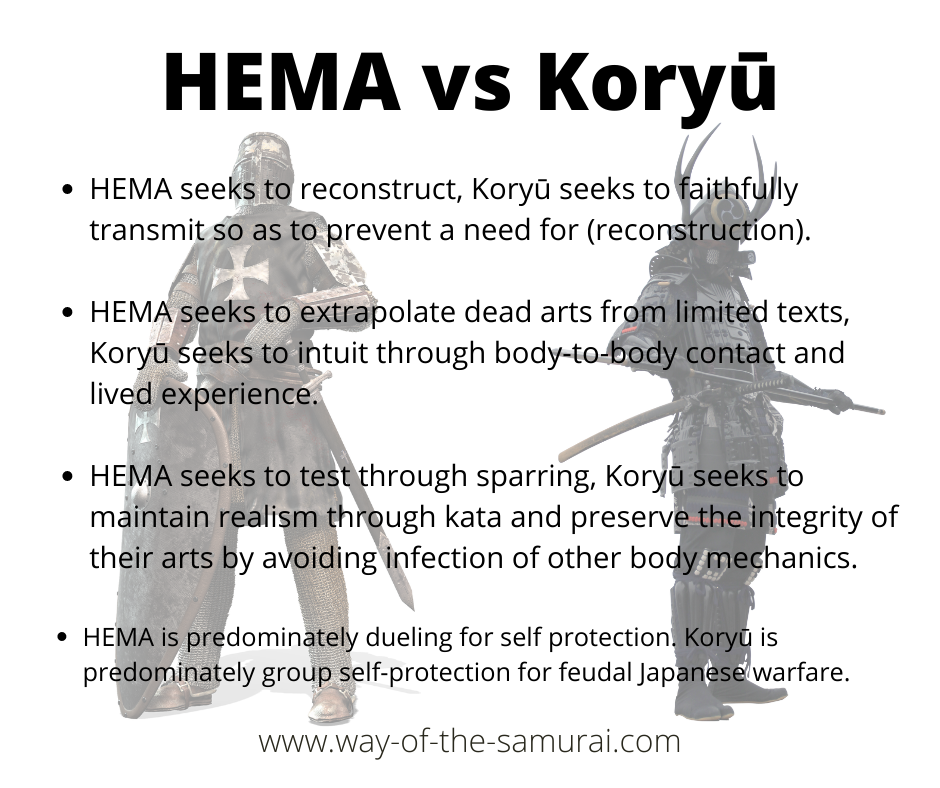 Okay, but can Koryu help HEMA with it's techniques? Well, as noted previously on the discussion of techniques - they often aren’t actually for cutting or blocking or winning a 1-on-1 fight. Nor as we have seen in the discussion on sparring are they often for winning a duel. They cannot as we saw earlier be shown piecemeal, or quickly. They have to be trained, nearly to the exclusion of all else in order to fully realise the technique in the deepest level of the bones, the ingrained pattern of the nerves. You can’t use Koryū body mechanics in HEMA, for the same reason you cannot use a yumi (Japanese bow) in a Weaver handgun stance, or use a compound bow as you would a yumi. They are all projectile weapons sure, but of a different time, of a different age and with a different purpose.

Ultimately, there is little compatibility, beyond sincere passion for what we do, between HEMA and Koryū.

The Koryū are predominantly systems of combat for battlefields or for killing people not expecting a fight. They aren’t designed to be pretty, they are designed to focus killing intent. They do this through instilling a unique psychological mindset through the vehicle of physical practice encapsulating a cultural, philosophical, religious and tactical ethos.

Can Koryu Help HEMA? - A Fossil is Not a Dinosaur

“There are many schools that have died out, but their documentation survives. Reinvention is taking something dead and using written records alone to recreate it. The results vary on the quality and prior knowledge of the reinventor.  Martially, the results may be viable or effective. But is it really the same school, or something new? Do the reinventors really “have it” from the inside out? They can’t — it’s dead, and a fossil is not a dinosaur. They do not have the essential teachings that were the life-blood of the school, things that are usually transmitted not only orally, but through crossed weapons or body-to-body.  And honestly, what’s the point? Why revive an extinct naginata school, for example, when there are perfectly viable extant schools that one could join, and pay one’s dues, earning a level of true expertise. It’s like going to the museum and climbing onto a stuffed horse to ride, when next door, there are stables full of quarterhorses and Appaloosas”.

“I often share bemusement when someone says that they want to recreate, say, a lost kusarigama or grappling school. Why would you do that when you can go to a teacher of a living school of those arts and help ensure they are passed on? But in a case like, say, the European longsword, it’s different. No such teacher exists. So if one’s passion is towards the ethos of the longsword, then what I called reinvention is their only choice. We only have so many years to live, and so many hours we are given to find happiness. If trying to study and restore a lost martial lineage fills your hours with joy, great.

However, the idea that having original sources uncontaminated by “later generations” is somehow more pure is silly. I am a third generation, American Jewish guy from Pittsburgh who has 600 years of Euro-American tradition separating me from anything that happened in Europe in the 14th century. The same social, political and cultural changes that made the longsword extinct are what shaped the ethos that produced me. So without a surviving tradition, I am even further cut off from that earlier world. Beyond this —  you don’t know what you don’t know. So much in any culture is oral, so how do we know what is missing.

We can’t help but be contaminated by what we learn from other martial arts or our own external experiences. You have to accept that you cannot achieve the same things that can be drawn from a living transmission.  These are the subtle things that make a particular tradition unique, and they can only be learned body-to-body. Living tradition is not just a series of documents passed hand-to-hand. It’s body-to-body knowledge, most of which is not documented. That is not meant in arrogant or hubristic way, vis-à-vis European martial arts revival, but this sort of internal gearing is what generational transmission can maintain but print cannot record. I am not questioning that people can’t come up with some fascinating information. Absolutely. But I believe that if I wanted to learn fencing and I found someone who studied with a student of Aldo Naldi, the information I can receive will very likely be richer, more nuanced and deeper than what I could learn mining texts of people who are not linked to me in a hand-to-hand, body-to-body way”.

- Amdur, Ellis. Being Old School: An Interview with Ellis Amdur on the Classical Martial Arts of Japan. https://freelanceacademypress.wordpress.com/2014/11/06/going-old-school-classical-martial-arts/

Can Koryu Help HEMA? - My Conclusion

I applaud the efforts of HEMA enthusiasts, I get it. I see the appeal in celebrating my own culture’s fighting methods. The excitement of exploration, the limitlessness of potential and the quest for lost knowledge. I am envious of their freedom in some ways.

But I am confused. There are actual extant arts, dying out, needing students to learn and carry on those traditions, and something that is still alive now may die out because people were too distracted trying to resurrect the long dead.

You've read my answer to Can Koryu Help HEMA? - Check out more about Koryu - here