Knife Attack - How Common Are They and How Can You Stop Them? 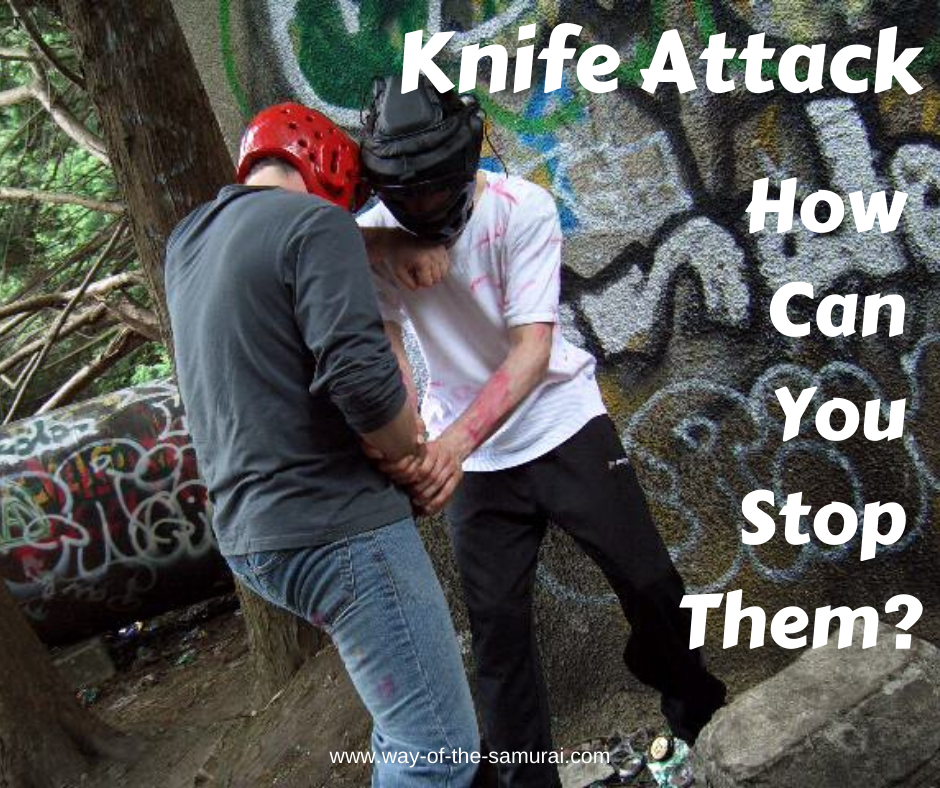 We are going to talk about a knife attack.

This next series of articles may be the most important writing of mine you ever read. What I am going to share with you in this series of articles, and most certainly in the book that they are based upon can literally save your life and the lives of those you love. That’s not hyperbole or exaggeration. It’s a fact. This information has saved lives.

I am going to be talking to you about a knife attack.

About how people can take an everyday item and turn it into a weapon to threaten you. To intimidate you. To cut you. To stab you. To kill you. And I am going to give you the strategies needed to deal with this and resources on how to fully protect yourself from a knife attack.

You may ask - why - on a samurai history, philosophy and martial arts site am I writing about this topic. It’s simple. This is one of the primary reasons I got into martial arts training in the first place. Self defence is a huge part of why I began studying the martial arts.

I studied the martial arts because I wanted the physical skills to deal with an aggressor, and in the quest, the martial arts became a corner stone of my life. The martial arts impact EVERY aspect of my life….it’s how I conduct myself when I wake up in the morning, it’s how I approach my businesses, it’s how I conduct every aspect of my life. Today I have multiple black belts and instructor ranks in several martial arts, both modern (I’m a qualified Self Defence Instructor and have taught, and trained with members of SWAT, SEAL, GSG9, SAS, British Police, Gardai and more – and am qualified in everything from hand to hand combat up to counter-terrorism).

In traditional arts, I have trained in Karate, Aikido, Judo, Jujutsu and several others and I currently specialise in the art of Japanese Swordsmanship, known as Muso Jikiden Eishin Ryu, Hyoho Niten Ichi Ryu and Shinto Muso Ryu Jodo.

However, after studying traditional martial arts for nearly a decade in my youth, I was confronted with something horrifying. Despite being highly trained, despite being a very high ranked Karate-ka at a young age....I still didn't know how to confront real world violence. I’ve gone on record a number of times that traditional martial arts does not adequately train people for real world violence – the situations that would require martial arts and self defence just aren’t addressed in TMA. That annoys a lot of people. That’s not to say that I don’t enjoy TMA, I do and have trained in them for nearly 30 years now. But it won’t prepare you for violence and it sure ain’t something I would rely on to save my life.

So I looked at Reality Based systems – and yes, they prepare you for social violence. Notice that term, it’s very important – SOCIAL violence. By this I mean, many reality based systems, including the ones I teach, prepare you brilliantly for social situations where you made need to defend yourself – the pub fight, the road rage incident, even in some extremes like an armed robbery or a knife attack. And that's where a lot of the stuff you'll be reading about in these articles comes from...my SWAT and Special Forces teachers, in particular from one Special Warfare Intelligence Officer for the Commander, Naval Special Warfare Command (the Admiral in charge of all SEAL Teams).

Now, truthfully, knife attack articles are something I hate writing. I hate them because they could all too easily come off as click-bait, or scaremongering. Taking advantage of people’s fears in order to “sell product”. Stoking the fires of suspicion, social injustice, racism etc and taking facts out of context in order to manipulate the audience. I’m not going to be doing that, I’m going to give you the facts and you can make an informed decision.

I debated writing and publishing this knife attack series with my wife. I didn’t want to “take advantage” of the knife attack climate. But here is the thing she said to me. “It might be uncomfortable for you, but you’re not forcing anyone, and the fact is - the information you have, has saved lives. By writing about it and sharing it you could save more lives”. And she is right. As always.

And then Friday happened. 2 days ago,

“Five people were stabbed in the space of two hours on Friday night in a spate of knife attacks across London". (1)

“Knife crime in England and Wales reached an unprecedented high in the year to June, increasing by 7% on the previous 12 months, according to figures released last month.

Police-recorded offences involving a knife or sharp instrument rose to 44,076, the Office for National Statistics said, the highest figure since 2010-11 when comparable data began.

Almost half the offences were stabbings, 43% were robberies, with the figures also including rape and sexual assault”. (2)

The BBC reported earlier this year that -

This is an 80% increase from the low-point in the year ending March 2014, when there were 23,945 offences, and is the highest number since comparable data was compiled”. (2)

And this is not just confined to the UK.

However, looking past the petty politics to the facts, London has far less of a problem with violent crime than many major US cities. According to crime statistics released by the Federal Bureau of Investigation (FBI), knives are consistently used to kill people far more often than rifles are used. The numbers aren’t even close. In 2014 the FBI showed that there are five times as many murders committed with knives than were committed with rifles last year. Though knife attack numbers still pale in comparison to handgun violence.

The reality is the world can be a violent place.

The context of all this however is that the chances that YOU, personally, will be a victim of a knife attack is relatively low.

What would you do in a knife attack?

A knife attack is close, dirty and terrifying. And very simple. That's the scariest thing about it.

Everybody is a knife expert. 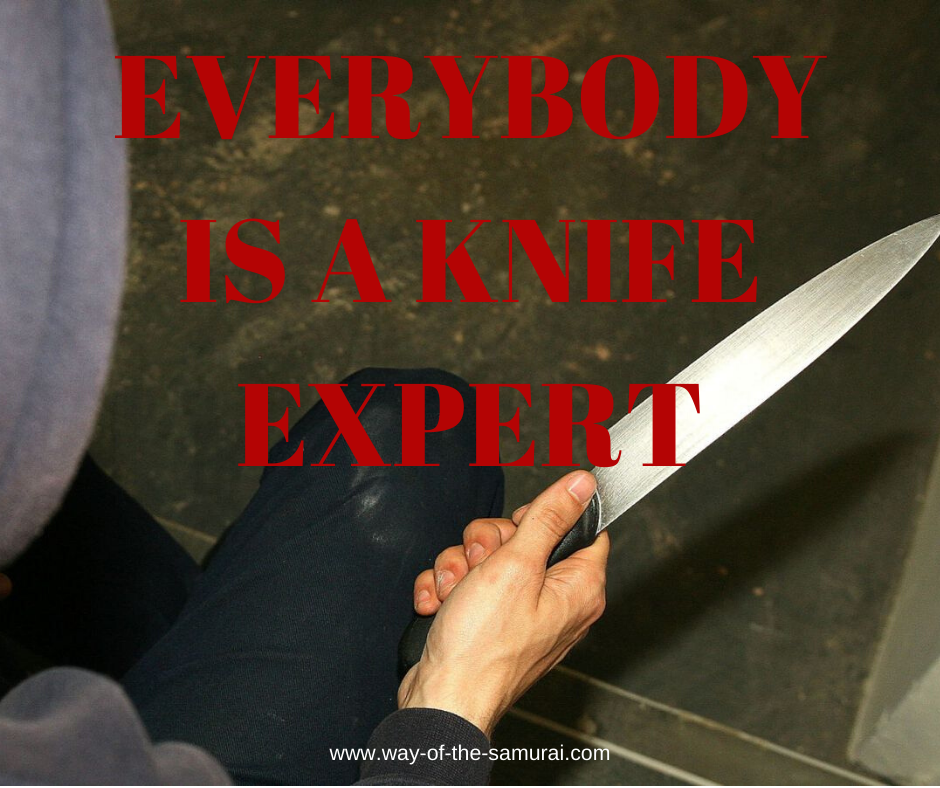 That's a true statement. Everyone is a knife expert. From the time we are children we are taught how to use a knife to cut up food and flesh. We all know how to cut a steak. We all know how to put the pointy end of the knife in something, or how to slice with it.

Each culture has its own tradition of knife culture. Some are more proficient that others, such as those in the Australian outback, Ranchers, the Bedouin Arabs of the Middle East, the cowboys of Southern Brazil and of course, the United States were folding knives are legal to carry in many parts. In every culture knives are a part of our daily lives. At home men, women and children cut and prepare food. We cut hair, use razors, open mail. The knife is a daily tool......and an easily accessible weapon.

In fact police officers are trained to NEVER conduct an interview in the kitchen. Too many knives in what could be an emotionally explosive situation.

But that does not mean everyone is a knife FIGHTING expert.

And this is an important distinction.

Because I want you to be an expert.

And I want you to use your natural instincts to get you there as quickly as possible. So let’s start with that.

One of the most common arguments that comes up from traditional martial artists about knife attack defence work is that you have to spend years training to negate the "flinch response". You know that moment when you're confronted with something unexpected, say a knife coming at you? You raise your hands in front of your face and move away right? Guess what, we all do that - it's hardwired into our brains, at the deepest level of our survival instinct. Protect and move away.

You could spend 60 years learning to suppress that - unsuccessfully I might add - or you could use it and accelerate your real life defence skills rapidly. I much prefer to go with the body and use those rapid response instincts than not. I don't think I'm smart enough to know better than millions of years of evolution.

So let's work with it.

If you’re threatened or attacked you will respond the same way everyone does. Your hands come up and you move away.

This is our start position for what we'll call "shielding".

We’ll cover more of this in next weeks article on knife attacks...but if you don’t want to wait, and you appreciate that this is important information you can get my complete knife attack defence course for just $97 right now.

You've been reading about  how to defend against a knife attack defence. Want the same system that trains you to do just that? Check it out here