The Story of Irezumi

Samurai tattoos are a fascinating subject. In Japan the art of tattooing has a very long history. It is called "Irezumi" (入れ墨, 入墨, 紋身, 刺花, 剳青, 黥 or 刺青) in Japanese, meaning "insert ink" (based on how you pronounce the original Chinese characters). It can also be called "bunshin" meaning "decorating the body".

Traditionally in Japan the practice of irezumi extends to over 10,000 years, where the earliest tribes settled on Japan used tattooing for spiritual and decorative reasons. The earliest note in literature occurred around the Yayoi Period (300 BC - 300 AD) as they were mentioned by the Chinese and were evidence of high status. However during the next period, the Kafun period of 300 AD - 600, tattoos were used for a more sinister and practical purpose - to mark and identify a criminal, a practice called "bokkei"  (or bokukei, meaning punishment by tattooing). This gave rise to a very negative connotation to irezumi, one that would be later seized upon and celebrated by the outsider criminal element of modern Japan - the Yakuza (ヤクザ). 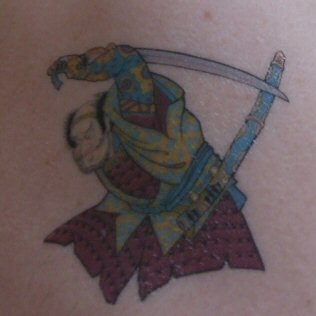 This criminal association of the tattoo remained in Japan for over a thousand years. During the Edo period, which began with the last great samurai war, society moved from a martially focus to one of cultural refinement. Less time was spent pursuing the arts of war, as peace reigned the land, (save for a samurai rebellion or two) and the warrior class was encouraged to spend more time studying the arts - such as calligraphy, the tea ceremony and painting.

It was during this time that woodblock prints - initially developed in China to accompany it's famous story the Water Margin became the rage of an increasingly hedonistic Japanese culture. Woodblock prints featured remarkably colourful images of exotic warriors, dragons, tigers and more. These entranced many of the younger popular and the demand for the incredibly intricate and colourful irezumi or samurai tattoo we see today increased.

They were also allegedly very popular with the merchant class. During the Edo period the ruling samurai class resented the increasing wealth of the upcoming merchant class. As such they issued edicts banning the displaying of wealth. Many merchants turned to irezumi samurai tattoos to turn their own bodies into a living and precious work of art that they could easily conceal beneath their clothes.

This surge in clandestine popularity with the samurai tattoo became even more deeply associated with the criminal class as the age of the samurai ended in 1868 AD, with the return of the Emperor to power, starting what is known as the Mejii period. Under the Mejii emperor the tattoo and practice of irezumi was made illegal. This forced an already cultural grey area firmly underground where it was whole heartedly embraced by the Yakuza, the outsider Mafia-like gangsters of Japan. It is from this quarter that the art of irezumi and the samurai tattoo reached its peak.

In 1948 the American Occupation forces legalised tattooing in Japan, however it still remains a very closed and underground world, heavily associated with the Yakuza and criminality. Today many public baths, gyms and dojo's will not allow those with irezumi tattoo's in (funnily there is an exception for non-Japanese, many of my friends, some of whom have extensive tattoo, like Maori tribal work, have no problem entering dojo's and gyms. It's an excepted part of OUR culture, not theirs).

Those seeking a legitimate samurai tattoo can't simply walk down a main street in Tokyo. The Tattooists, known as Horishi, are still secretive. They don't advertise and you often need a personal letter of introduction from someone they have worked on previously. It's still a very closed and traditional world, their students spend over 10 years practising on their own flesh before they can work on another person - and it's expensive too, a full arms back shirt costing upwards of $30,000.

But if you want a samurai tattoo, it's better to understand the background and culture associated with them. If you're really interested and want to learn more about Samurai Tattoos then check out these excellent books on the topic -

You can also check out this documentary on the Yakuza - it's a little sensationalistic and I'd take much of this with a pinch of salt, but it does show some excellent examples of Irezumi and Horimono

And this is a very shot piece from National Geographic on Horimono...

Return to the Home Page here