Translating the Texts of the Masters

Translating the Texts of the Masters is an unusual article. I'm not entirely sure if there's any interest in the subject matter I'll cover here. That said it strikes me that if I find it interesting, others may also find it interesting.

As part of my investigation into my school, I've managed to acquire a number of modern and antique texts relating to the teachings of the techniques, but also the oral teachings, inner teachings and histories of the style. These documents are in the Japanese, the original language of these arts. They take a great deal of time to translate – Japanese is by no means my first language and progress is painstakingly slow and fraught with difficulty. And that's the subject of this article.

Below is a photograph of a passage of text from page 12 of Mitani Yoshisato Sensei's: “Muso Jikiden Eishin Ryu, Iaido Kyohan", published in 1982. 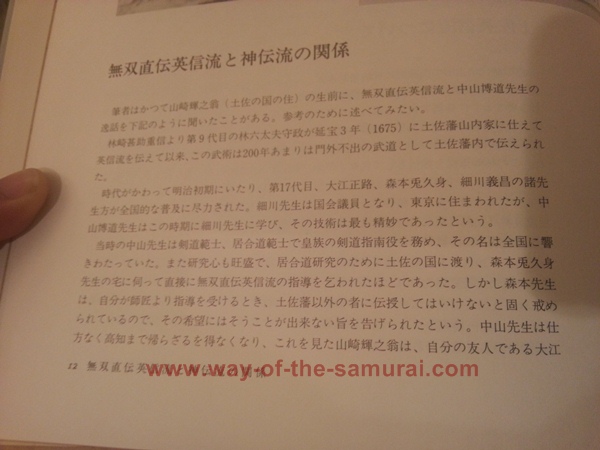 Here was my first attempt at  translating the texts of the masters; 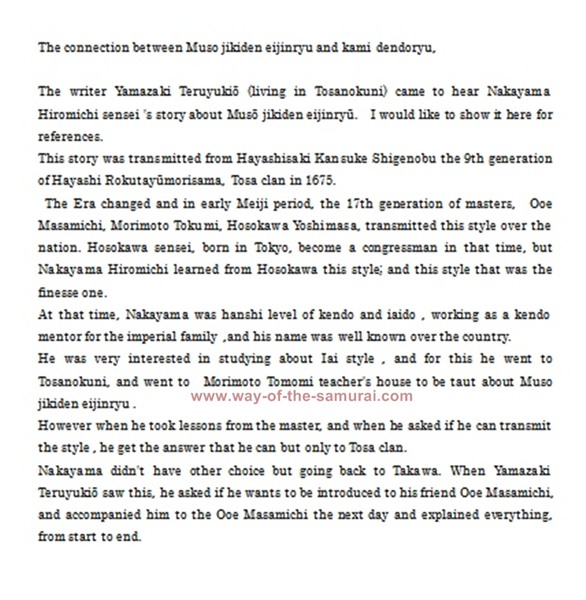 For the heck of it, I wrote down a romanji (translating Japanese to Roman letters) version of the same as well. If you're really curious I also did a hiragana (a basic Japanese syllabary indicating how a word or pictogram sounds) version too. 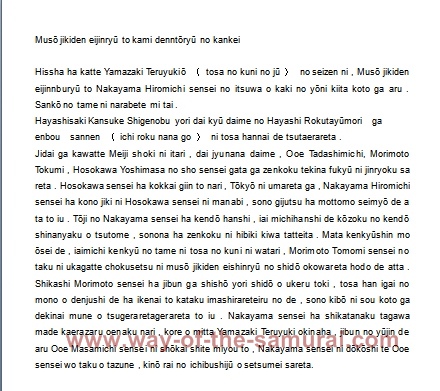 As you can see both of these are quite clunky and rough. I'm not worried too much about the flow of the writing or my grammar at this stage - just accurately getting the meaning down.

Here's my second translation of the same passage; 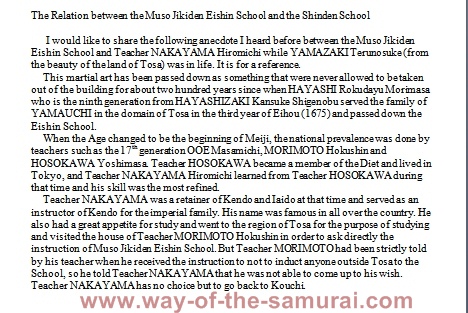 Again, for the heck of it, here's the romanji version of the same as well. I'm happier with this second translation, but again, it's by no means perfect in terms of sentence structure, grammar etc. 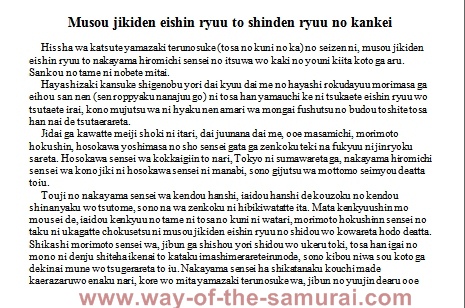 So why the differences in Translating the Texts of the Masters?

Firstly, my Japanese is rusty. I haven't needed to have a conversation or read anything in Japanese in over 10 years...the keen edge of my linguistic blade has rusted. Secondly Japanese is a pictographic language - there is NO DEFINITIVE method of translating those pictures into specific English or Romanised letters. That's a problem when translating the texts of the masters...particularly with the names. :-)

Outside of that, the actual way in which sentences are put together in Japanese is a nightmare to translate. Half the time my text comes out looking like Yoda was speaking while drunk. ;-)

They also don't have plurals and qualifying these requires special measures. Helpful prepositions like at/by/in/to/from/with, yeah they don't exist in Japanese. Again that job is performed by specific structured particles. These have no direct translation. And these particles are the only indication as to the sentences structure because in Japanese the verb arrives at the end of the sentence.

And speaking of sentence structure, Japanese does not have to have a subject for the sentence...or future tenses.....or direct translations of words into English...

Or...well you can see where it's getting awkward. :-D

But it's even worse when translating martial arts texts.

Then we need to look at the structure (structural invariance). - where we have a great deal of confusion...not to mention attempts to map each individual word to its English equivalent accurately (lexical invariance)..

And here's the thing, maintain the structure as I did in the first version of the translation produces clunky text that fails to accurately convey the meaning. Add any attempt at lexical accuracy and you get utter gibberish. That makes absolutely no sense.

There are jewels hidden with the sands of these texts - important instructions, admonishments, warnings, recommendations and beyond all that...the essence of my art...and like the art itself with these translations I may spend the rest of my life trying to accurately convey the meaning and intent of those that came before me and have passed this knowledge down.

You've been reading Translating the Texts of the Masters. Read more about Iaido and Muso Jikiden Eishin Ryū - here.